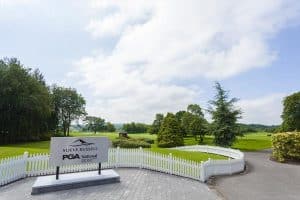 World renowned short game coach Gareth Raflewski has opened his European base at PGA National Ireland Slieve Russell. The performance center which is headed by PGA National Slieve Russell’s Head Professional, Gordon Smyth, is a state of the art short game specific academy where some of Ireland’s and the worlds best attend. 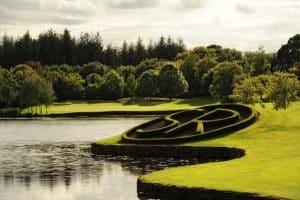 Gordon Smyth, Head PGA professional at PGA National
Slieve Russell heads the European base of Raflewski Golf’s
state-of-the-art performance studio.
Gareth Raflewski the Canada-based Irish native has become
a world-renowned short game coach. A coach to Jin Young
Ko, the Jutanugarn sisters, Lydia Ko, Nasa Hataoka and
others, he set up his only state-of-the-art performance
academy in Europe at PGA National Slieve Russell where
PGA Professional Gordon Smyth heads the facility.
Smyth became acquainted Raflewski through a mutual friend
and since then he has been travelling over and back
Stateside on a regular basis to study him in action.
An engineer by trade, Raflewski’s stock rose when he gave an
LPGA Tour player a lesson and dramatically changed her
putting stats. Suddenly there was an appetite for whatever
magic potion he had and now he has taught three of the last
five number one golfers in the women’s game.
“Knowledge is key of course, both
for me as a coach and for the pupil”
– Gordon Smyth,

Raflewski also has a very strong presence on the PGA Tour with tour
winners Nick Taylor,Kiradech Aphibarnrat and Hudson Swafford
among others.
Continually developing Gordon’s coaching skills is something that
Gareth works tirelessly on, mentoring him and passing on his
invaluable knowledge.
“It was a no-brainer for me,” said Smyth. “I am hugely into coaching
and that’s where I put all my time.”
The Raflewski Performance Academy walls are brimming with
technology, from the ‘Foresight Sports’ GC Quad which will help
players dial-in their game like never before, to cutting edge systems
like the Sam Putt Lab, Capto 3D Putting, Swing Catalyst and a
bespoke ‘Well Putt’ indoor green.
From the state-of-the-art studio, players can take their newfound
information to the multiple practice areas on-site, honing their skills
with drills and repetitions before putting the practice into play on the
golf course.

“I am in touch with Gareth daily trying to pick his brains. It’s great.
Putting is a game within a game. Traditionally I would have always
coached the long game and not really done much with putting or
wedges. “It’s great to have that knowledge now though. I have
learned a huge amount from Gareth and to see what he’s doing with
some of the best players in the world has helped my coaching
approach greatly. If you look at Jin Young Ko’s stats they are
ridiculous. One of the Jutanugarn sisters under Gareth didn’t miss
from five feet in on the LPGA for a year. It’s incredible really.
“It’s not a system, not a ‘this is how you have to do it’ kind of thing. It
is fact-based and we use technology to back it up. Being able to go
to tour events and see how Gareth works on a Monday, Tuesday and
Wednesday in the lead-up to a tournament is unbelievable.
“It’s not always technical work, it can be performance & skill based
work. Getting the player under pressure doing certain tasks, that
ultimately leads into the tournament,” he added.
The Raflewski Golf Academy in Slieve Russell has proven to be very
popular with elite-level golfers with many coming from all four
corners of the country to get short game lessons from Smyth and a
host of Irelands best professionals have also visited the academy with
Niall Kearney, Tom McKibbin and Stuart Grehan among others all
making the trip to Cavan.

“The short game is definitely a neglected area of the game by most
and any improvement in it can lead to significantly lower scores for
people. No matter what level, if you want to shave shots off your
rounds cleaning up your short game is the easiest way to do it’’ 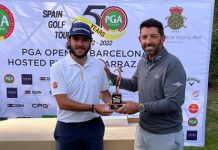 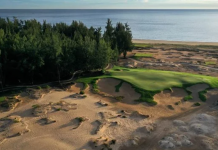 “Pars in the Algarve”